Kade Hodgetts - Stories of Success from Literate Learners for Life 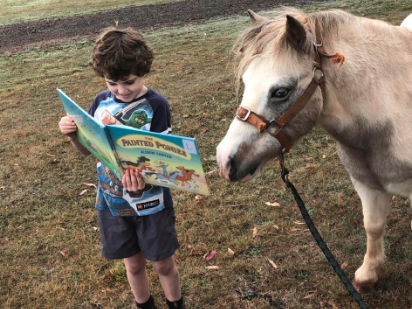 After borrowing a book from the school library, Kade Hodgetts who is Year One at St Thomas More’s in Launceston, was adamant that he would be able to read ‘the Painted Ponies’ by Alison Lester by the end of the week. His mother, Danielle Hodgetts was surprised when he rushed home from school to be told that he was going to be reading. “He had an amazing teacher this year, who has just taken him under their wing, which has helped to really encourage him when he set off to try and read to his pony, it’s been great.”

Kade had been struggling to piece together the steps to start reading, despite giving it his best effort. He had been a very reluctant reader until this year and struggled to put together a sentence. Kade’s favourite pet is a pony named Noddy, who he feeds and loves spending time with. Even though they already spend a lot of time together, he wanted to learn to read so he could share one of his favourite stories with his pet pony, Noddy.

Kade is being supported by his Year One teacher, Kate Nicholls and the InitiaLit program which is a core aspect of the Literate Learners for Life Initiative. By the Saturday of the same week, Kade was able to piece together the basics of a sentence and was able to read the Alison Lester classic. Noddy stood next to Kade, and politely listened as he read the book about ponies to his own pony. How sweet!

Kade has now been reading books about trucks, and other books about ponies to Noddy at home with his Mum, who recognises the importance that InitiaLit has played within her school community at St Thomas More’s and hopes that plenty of other students find the same passion for reading and literacy like her son did. “Through the program at school, which was encouraging him to read at home, has led to him blossoming this year which has been lovely to watch.” Said Danielle, “I think it was exactly what he needed, as it just breaks it down simply. It is just lovely to see Kade succeed in this.”

Every student. Every Year. Every Subject.