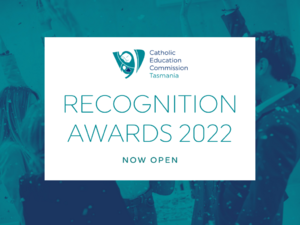 Nominations are now open for the 2022 Recognition Awards!

Awards are presented for the following three categories:

We encourage you to think about those you work with and those within your school community and the broader Catholic Education Tasmania community who work tirelessly to support our students!

Catholic Education Week celebrations provide an opportunity to recognise our committed and gifted teachers and support staff who have served 25 years in Catholic education.

Since the 25 Years of Service Awards began in 2006, over 350 Catholic Education Tasmania staff have been recognised for their generous service to our schools and colleges.

Nominations for Recognition Awards and 25 Years of Service Awards are called for in Term Two each year. Presentations are made to recipients at regional events held during Catholic Education Week.